The Associated General Contractors of America, the voice of the construction industry since 1918, is an organization of qualified construction contractors and industry-related companies dedicated to Skill, Integrity, and Responsibility.

AGC - San Diego Chapter, Inc. has been in existence since 1927. AGC is dedicated to improving the construction industry daily by educating the industry to employ the finest skills, promoting use of the latest technology, and advocating building the best quality projects for owners, both public and private. 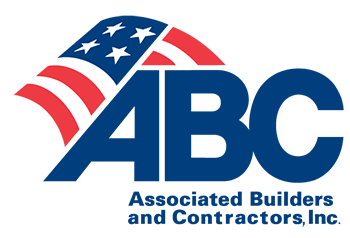 Associated Builders and Contractors (ABC) is a national association that advances and defends the principles of the merit shop in the construction industry and provides its members with an opportunity to succeed. ABC has 70 Chapters nationwide including U.S. territories, representing 19,000 merit shop firms.

About ABC
THE VOICE OF THE MERIT SHOP®

Associated Builders and Contractors (ABC) is a national trade association representing 22,000 members from more than 19,000 construction and industry-related firms. Founded on the merit shop philosophy, ABC and its 70 chapters help members develop people, win work and deliver that work safely, ethically and profitably for the betterment of the communities in which they work. ABC's membership represents all specialties within the U.S. construction industry and is comprised primarily of firms that perform work in the industrial and commercial sectors of the industry.

ABC is the merit shop construction industry's voice with the legislative, executive and judicial branches of the federal government and with state and local governments, as well as with the news media.

ABC's mission is the advancement of the merit shop construction philosophy, which encourages open competition and a free-enterprise approach that awards contracts based solely on merit, regardless of labor affiliation.

Through its national office and chapters, ABC's objective is to provide its members with an organization to deal with issues on an industry-wide basis.

ABC was founded in 1950 when seven contractors gathered in Baltimore, Md. to create an association based on the shared belief that construction projects should be awarded on merit to the most qualified and responsible low bidders. The courage and dedication of those seven contractors - Charles Mullan, C.K. Wells, Jr., Philip Cloves, Ernest Shultz, Edward Colwill, Charles Knott and Edward Dickinson - helped to quickly spread the merit shop philosophy, within time making ABC the fastest growing association in the United States. Today, ABC is recognized as one of the leading organizations representing America's business community and the merit shop construction industry.

The Coalition for Adequate School Housing (CASH) was founded in 1978 as a response to diminished statewide resources for school facilities. CASH has over 1,200 members and is the preeminent statewide organization representing school facility professionals in both the public and private sectors. CASH provides advocacy, leadership development, educational opportunities, and resources within the school facilities arena. CASH advocacy ensures there are State funds to build new, renovate, and maintain K-12 schools. CASH is dedicated to making sure the students of California have access to quality, safe and healthy environments that foster learning and success.